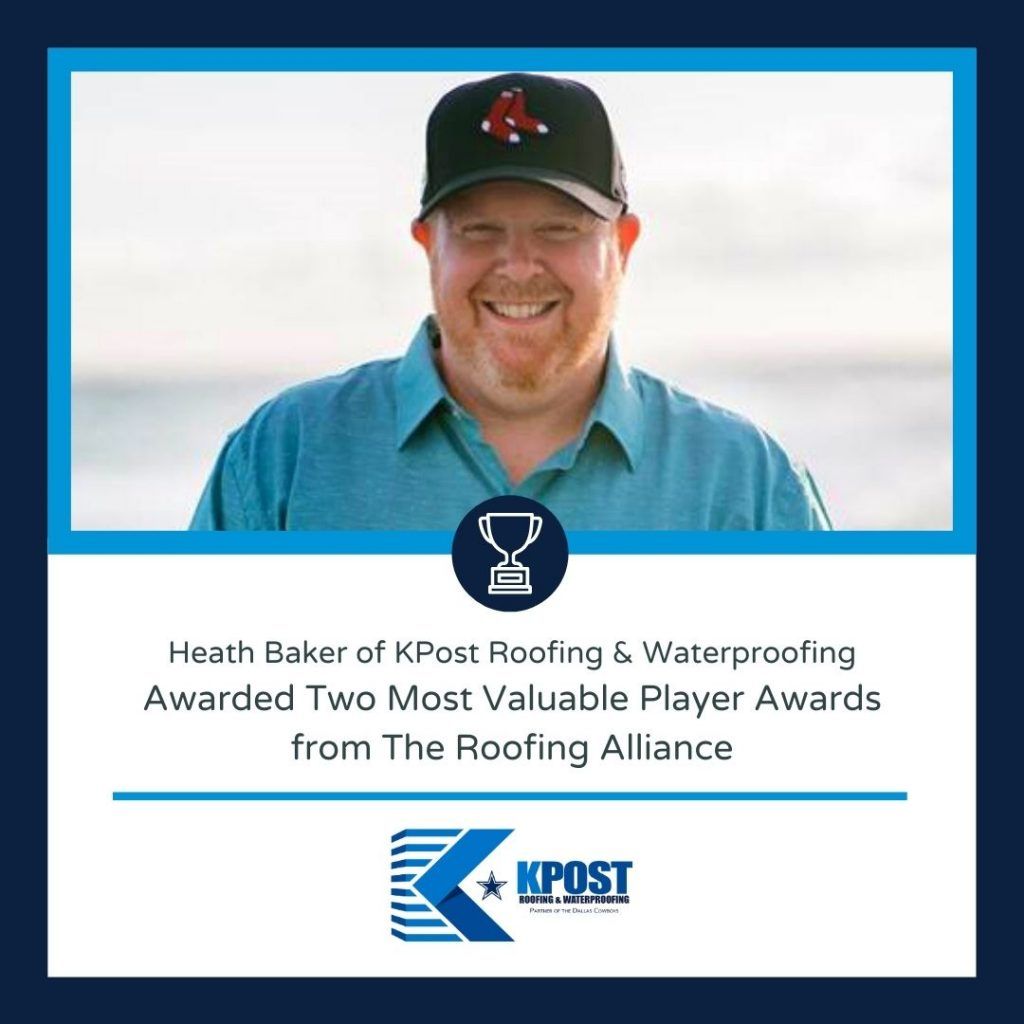 The Roofing Alliance knows dedicated, reliable employees play a critical role in a company’s success. That’s why they created their Most Valuable Player (MVP) Awards – to celebrate outstanding employees both within and outside the workplace. These awards not only recognize exemplary leadership within their company, but charitable deeds done outside working hours, such as community involvement, challenges they’ve overcome and commitment to helping others.

Keith Post, CEO of KPost, says of Heath, “He keeps his crew on their toes; he makes sure the customer gets what they expect. We nominated Heath for the Outstanding On-the-Job Performance and Workmanship MVP Award because of his dedication not only to KPost, but to his crew.” Safety is as much of a priority in service as it is in our service department. Heath goes above and beyond in monitoring the safety of his crews. Through GEO-fencing and GPS monitoring, Heath has helped decrease incidents on the road and reroute the drivers to save 15% in fuel usage. Heath also makes sure his team is up-to-date on computer literacy, both for paperwork and DataForma, the software used to track all estimates, work orders and invoices. During peak months, he often works late into the night to make sure everything is recorded properly for other departments. All of his work with his crew has made them 99% paperless.

Steve Little, President of KPost adds, “It was an honor to nominate and then award Heath with these Roofing Alliance’s MVP Awards. Employees like Heath make us proud.” Heath stays very involved in our community, donating time to Habitat for Humanity projects, feeding the homeless, and in many other ways. He and his wife have done missionary work in Romania, Ecuador, and Guatemala. One time in Romania, his group walked 1.5 miles to get fresh water for a family to have water to bathe that evening.

”Wow, what an honor,” says Heath. “Thank you so much for nominating me for these awards. I appreciate it. It’s an honor to work for KPost and to be a leader here. I take pride in my work and am thankful for the opportunity to be a leader and do what I’ve been doing. I look forward to working hard for KPost for years to come.”